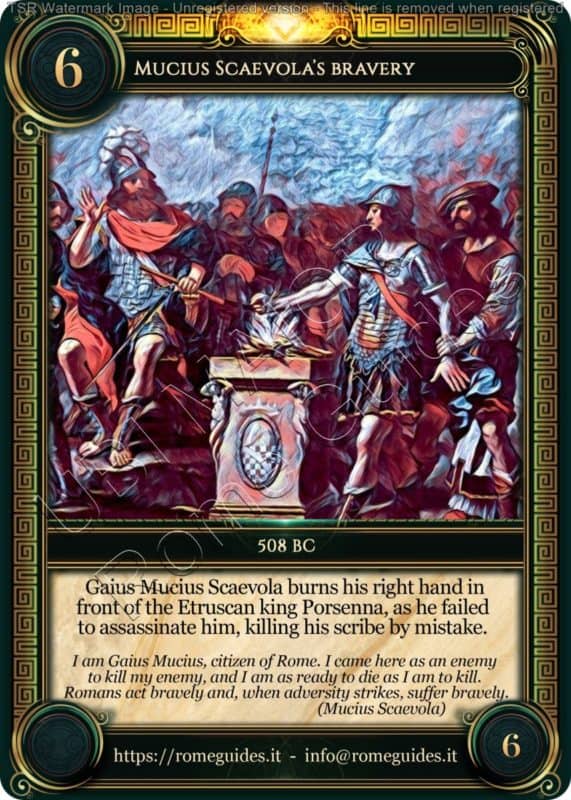 The last king of Rome Tarquinius the Superbus, of Etruscan lineage, after his expulsion from Rome took refuge with the king of Chiusi Porsenna and in 508 BC easily convinced him to march against the Romans to regain the throne.

At this point, Rome prepared itself for the defense and to endure a long siege: when, however, began to lack food, a group of young Romans thought to resolve the situation with a brave action, that of assassinating the king Porsenna infiltrating at night in the enemy camp. The young men drew lots and it was the turn of Gaius Mucius Cord, who came out of the city and secretly reached the enemy camp armed only with a dagger.

Moving silently in the shadows, Gaius Mucius managed to get to the center of the enemy camp. The Etruscan king Porsenna was sitting on a stage, assisted by a secretary, and was distributing the salary to the soldiers. Since the king and his secretary were dressed similarly, Gaius Mucius failed to distinguish between the two and stabbed the wrong man.

Immediately captured, the young man was led in front of the king Porsenna, to whom he addressed words of challenge: “I’m not the only one who wants to kill you: a lot of young Romans are waiting for their turn to take your life and save the country“. Porsenna ordered him to reveal everything he knew, otherwise he would have burned him alive. At that point Gaius Mucius put his right hand on the fire of an altar and let it burn, numb to the pain, saying, “Look how a man considers his own body when he loves his country“.

The king Porsenna was so impressed by that gesture that he ordered to release the young man and to sign a peace treaty with the Romans. Gaius Mucius returned to Rome, where he was welcomed with honor and was nicknamed “Scaevola“, which means left-handed.