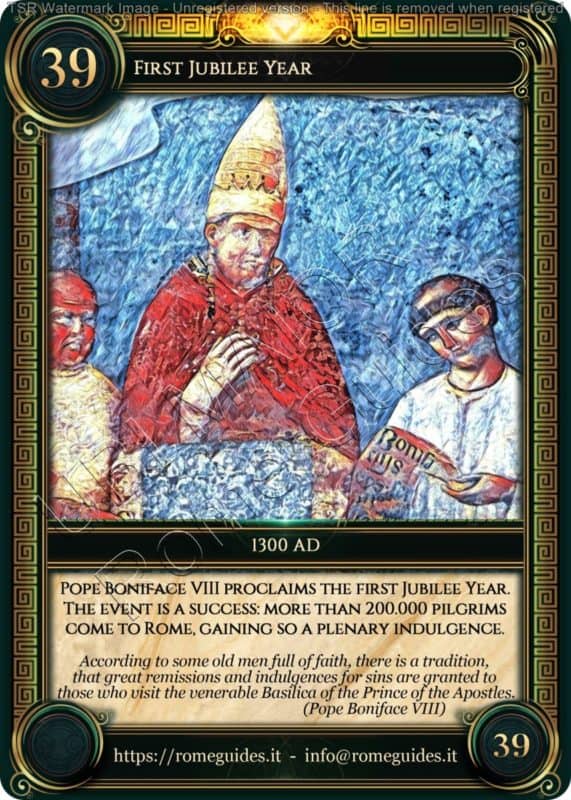 A talented jurist of brilliant intelligence and willpower, Benedetto Caetani was born in Anagni in 1235 and was elected Pope in 1294 with the name of Boniface VIII. Many Cardinals soon regretted having given their vote to this man of extraordinary energy, who was determined to continue the Church’s traditional policy of defending its feudal rights over the various ecclesiastical domains.

Powerful Roman nobles and illustrious ecclesiastics, such as Cardinals Giacomo and Pietro Colonna, opposed the Pope, even having a convoy of eighty mules coming from Anagni, loaded with the papal treasure, assaulted and plundered. The Pope excommunicated them and launched a crusade against the fortress of Palestrina, razing it to the ground.

The highest moment of the fortune of Boniface VIII was the First Jubilee, proclaimed on February 22th 1300: the Pope granted a plenary indulgence of sins to all those who during the year had traveled to Rome to visit for fifteen days the basilicas of St. Peter and St. Paul and the tombs of the Apostles.

Throngs of pilgrims set out from Italy and all over Europe. These journeys were literally months-long adventures, through rough and bandit-infested roads, with many pilgrims writing their last wills before leaving. Some traveled by mule or wagon, but the vast majority went on foot. On the way there were few inns, and these few did not have bathrooms, nor running water, nor heating, with so dirty rooms that perhaps many pilgrims felt like Mary and Joseph, forced to take refuge in a stable because no inn wanted them to stay.

When they finally reached Rome, the pilgrims did not encounter a better situation: Rome was a poor city, inhabited by a miserable and ragged people. Here and there one could see some towers or strongholds, but the monuments of the ancient Romans had gone to ruin and no one had restored them anymore.

However, no one complained. The effort had been enormous, but it had been worth it. Thousands of people entered the Eternal City (30,000 per day), and the citizens of Rome saw in this event a prophetic sign of the promised Kingdom that would have come as a gift from God. The pilgrims prostrated themselves before the tombs of the Apostles, where they received the plenary indulgence and dropped their obolus, which two deacons armed with shovels collected. The same pilgrims could now stand before the Pope, crowned for the first time with a diadem composed of two crowns, one superimposed on the other, a symbol of the superiority of the Pontiff over every earthly Sovereign. In the future, a third crown would be added to these two crowns, and the papal tiara would henceforth be called “triregnum“.

Among the pilgrims there were also noble lords and princes of royal blood. Mixed in among them, there was also a man from Florence, anonymous at the time and now known all over the world: the great poet Dante Alighieri, author of the Divine Comedy. He was impressed by the organization of the city, but also by the shameless corruption of Rome, so much so as to include Pope Boniface VIII in Hell, for simony and for having been the ruin of Florence.