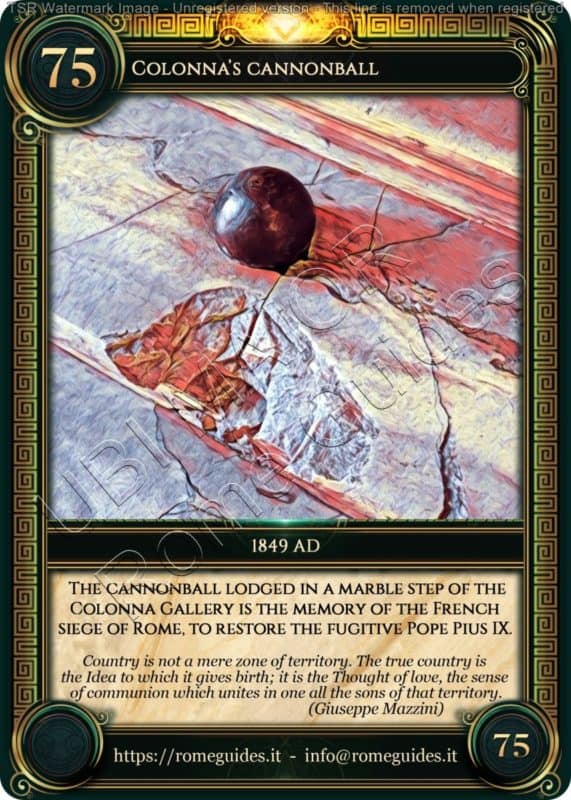 In 1849, for a few months, Rome freed itself from the Pope to proclaim the so-called Roman Republic, ruled by a revolutionary Constitution. An indirect protagonist of this historical phase was the Colonna Palace, the prestigious residence of the family with the same name, protagonist for centuries in the history of Rome, with several cardinals and a Pope (Martin V) belonging to it.

Around 1848, all of Europe was shaken by revolutionary movements that wanted to establish, in place of the ancient monarchies brought back in vogue by the Restoration, various parliamentary republics that could be inspired by the principles of the French Revolution.

Pope Pius IX, who initially was apparently very close to these libertarian principles of the people, did nothing to support these armed struggles that were bloodying Europe; the Roman citizens, at that point, tired of waiting for a decision in their favor by the Pope, decided to rebel and, led by great Risorgimento patriots such as Giuseppe Mazzini and Giuseppe Garibaldi, decided to expel the Pope and install the Roman Republic.

The Pontiff reacted immediately and, in order to regain power and the throne of Rome, asked for help from the French, who began to bombard the revolutionary troops with cannonballs. One of these cannonballs, probably aimed near the Quirinal Palace around which the revolutionary soldiers were settled, missed its trajectory and hit one of the windows of the Colonna Palace, ending up on the beautiful marble staircase that divided the Hall of the Column from the Great Hall, sticking between the steps.

The Roman Republic, proclaimed on February 9th 1849, dissolved a few months later, on July 4th of the same year, and the Pope regained full and absolute power over Rome and the Papal States. The cannon ball remained since then on the steps of the Colonna Palace, in perpetual memory of that patriotic battle.