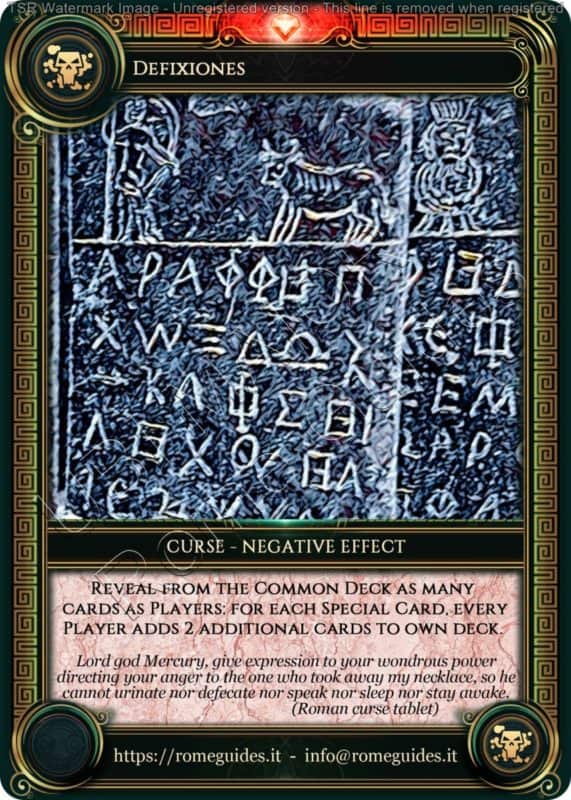 The defixiones, also known as curse tablets, are inscribed pieces of lead, usually in the form of small, thin sheets, intended to influence, by supernatural means, the actions or welfare of persons or animals against their will.

Conceived as an illicit and secret method of “individual justice”, alternative to the official one, the defixiones responded to objectives that the authors of the curses could not achieve through legality, thus materializing feelings such as envy, resentment, desire, anger or fear.

To be “activated”, the defixiones were to be placed in special locations, suitable for magical practices and usually strongly connected with the deities or demons invoked in the spell. Among these places, we distinguish three basic areas: the funerary area (tombs and necropolis), the aquatic area (seas, wells and springs, as for example in the Fountain of Anna Perenna in Rome) or places that could come into contact with the victim of the spell (such as the workplace or home).

Based on the content of the texts, it is possible to group the defixiones into different categories: the erotic defixiones (intended to destroy a love affair or to attract the beloved), the legal defixiones (drafted usually before one undergoes a trial, in order to make opponents unable to appear before a judge and to testify), the defixiones against thieves (drafted normally because of a theft, in order to recover the stolen goods and punish the criminal), and finally the agonistic defixiones (very similar to the imprecations against opponents of a sporting competition, such as gladiator fights or chariot races, in an attempt to promote the victory of their faction).

Even if the defixiones constituted one of the most clandestine and illicit aspects of Roman society, having been condemned since the 5th Century B.C. in the Laws of the Twelve Tables, the habit of writing curses on lead spread in all the Provinces of the Empire in a slow but inexorable way.